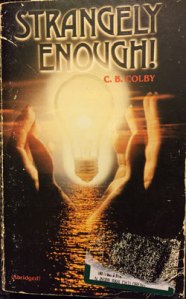 Every month until my book’s release next July, I’m blogging about a different scary book that helped define one of my summers.

This one holds a special place in my heart, because it was essentially a textbook in Stuff That Creeps Me Out. See, every kid has to learn her culture’s spooky tales, pseudo-historical BS, and urban legends somewhere. What better place than an anthology or series that recycles them? Before there was Supernatural, before The X-Files, before even Ripley’s Believe It or Not, there was Strangely Enough!

The book was first published in 1959, and according to the introduction, it was a collection of columns by C.B. Colby published in daily newspapers under the name “Adventure Today.” But what I read — along with so many other American kids — was an abridged paperback version of Strangely Enough! published by Scholastic. Back then, they gave you the publisher’s catalog in school, and you ordered yourself up some irresistible cheap reading material.

I’m almost sure the “light-bulb” cover pictured here is the edition I read, though SE! has had even wackier covers over the decades, featuring flying saucers, glowing space orbs, and the like.

Where I Read It: New York, New York, pre-gentrified Upper West Side. When I was nine or ten, around the time my mom moved us in with a community of religious do-gooders that my grandma called a “cult.”

What the Book Delivered: Spooky stories and more spooky stories! Few of the tales in Strangely Enough! are more than two pages long, but they pack a punch. Skimming through a used copy of the book I found at my local B & N, I was surprised by how many of these tales I remembered — and by how many I didn’t remember at all.

The stories that appealed to ten-year-old me were the creepy supernatural ones, not the ones about buried treasure or historical curiosities. This is where I first encountered the “Phantom Hitchhiker” legend (SE! has multiple versions), the “King of the Cats” folktale (here called “The Bewitched Cat of the Catskills”), and “The Devil’s Footprints.” Just like Chris Carter after him, Colby was one hell of a recycler of inherited lore.

But the stories that unsettled me the most — and hence stuck with me the longest — were the ones that didn’t have a typical folktale plot arc. The unsolved mysteries, the ragged bits of eerie strangeness.

Like the story of a “Lost TV Signal” that somehow crossed the Atlantic after the station that broadcast it had gone off the air. (“Possibly some of the weird sounds that we hear are really programs [or commercials] from other planets,” Colby suggests ominously.)

Or the story of “The Barbados Vault,” where an invisible force kept disturbing the coffins, no matter how well the entrance was barred. Or the account of “New England’s Darkest Day,” when the whole sky was covered by a mysterious haze, and the moon eventually rose “blood-red.” Or “Lord Dufferin’s Story,” in which a man has a terrifying midnight vision of a gravedigger that later saves his life.

And scariest of all to me, a story that is little more than a fragment: “The Whistle.” It involves an old woman, an isolated house, a small dog, and a mysterious noise. Not much happens, but because of the sheer lack of plot twists, historical details, or explanations, it’s one of the few tales in the book that feels like it could actually be true. You can hear the whole thing and see the accompanying art in this video tribute.

What This Book Taught Me: That science explains nothing and the world is full of horrifying mysteries. Unlike The Twilight Zone, which had a guiding moral intelligence; or later paranormal anthology shows, which have sympathetic figures like Mulder and Scully or Sam and Dean to guide us through the horror, SE! just threw this stuff at its young readers and yelled, “Boo!” And we couldn’t get enough.

And here’s the thing about this reading experience that can’t be replicated today: Reading this book in the ’70s or ’80s, we could not go online and find out if it was full of crap. Unless we felt like going to the library and doing actual research, we just had to take the stories at face value.

Now? Two clicks on my phone tell me that “Lord Dufferin’s Story” started as a piece of fiction. Thanks to mere minutes of research, I now know that “The Vanishing Riverboat” didn’t actually vanish, and that “New England’s Dark Day” was probably caused by smoke from forest fires, not supernatural forces. Even the moving coffins of the Barbados vault might have an explanation.

But the tale of “The Whistle”? That one offers no historical details, and my cursory search turns up nothing.

So fear a piercing whistle at night if you live alone in the pines nowhere near the railroad tracks. Fear the eruption of the unknown into the mundane, and keep your small dogs indoors.

Scary Books I’m Reading This Month: Fire and Ice: Soot, Solidarity, and Survival on the Roof of the World by Jonathan Mingle. It’s about climate change and the less-considered menace of black carbon, and yes, it is scary.

One thought on “Scary Books of Summer #2: Strangely Enough!”

YA novelist, movie critic, editor in the wilds of Vermont.